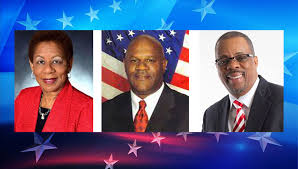 PINE BLUFF, Ark. – Voters in the largest city in Jefferson County are being asked to decide between three candidates all vying for Pine Bluff’s top seat.

Mayor Shirley Washington is looking to hold onto her office for another four years.

In the days leading up to Super Tuesday, Mays plans to be out in the community meeting voters.

“I want to be the leader that brings Pine Bluff back on the map,” Mays said. “I’m tired of all the negative talk about Pine Bluff. I live here. I was born and raised here. I would never leave Pine Bluff and that’s why I stayed the course and kept the faith.”

Mays points to his experience serving on city council for nearly a decade as one of the reasons he’s best suited for this job.

“I’m consistent at getting things done on the city council. People call me, I respond,” said Mays.

Mayor Shirley Washington called this campaign different since she’s focusing on all the work that comes with her current office.

“You have to continue to work the job and run the campaign,” Washington said. “My mantra before was 1 pine bluff stronger together and I think people want to keep that.”

Washington says the best testimony for voters is her track-record in office and all the projects she hope to continue.

“When I went in in 2017, I promised them that I’d work hard. I didn’t make any specific promises and I want them to step back and look at Pine Bluff 3 years ago and where we are now, and look at the momentum we have going,” Washington said.

Ivan Whitfield is also focusing on the campaign trail, spending time knocking on doors and speaking with voters.

“I bring a fresh idea,” Whitfield said. “My goal has always been to be a servant to the people.”

As a former Chief of the Pine Bluff Police Department, Whitfield says that gives him an edge and a view for what he believes should change. He’s asking voters to consider that.

“Instead of doing everything on Main Street, they may want to consider voting for a candidate that is going to bring money back to neighborhoods and make living conditions better,” Whitfield said.

Each candidate promising to keep meeting with voters and get their platform heard up until the polls close.