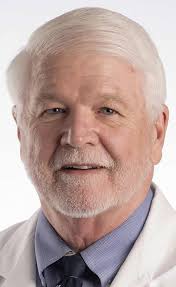 LITTLE ROCK — Robert W. Bradsher Jr., M.D. — a professor of infectious diseases in the Department of Internal Medicine — has received the 2020 Distinguished Faculty Service Award from the College of Medicine at the University of Arkansas for Medical Sciences (UAMS).

The award was announced as the keynote award from the 10th annual Dean’s Honor Awards, which recognize exemplary faculty and staff for their work in education, research and clinical care as well as humanism and service to the college and its mission in Arkansas.

The Pine Bluff, Arkansas, native received his undergraduate degree at the University of Arkansas, Fayetteville, in 1972 and his medical degree at UAMS in 1976. Bradsher interned and completed his residency in internal medicine at Johns Hopkins University in Baltimore. He continued his training with a fellowship in infectious diseases at Vanderbilt University in Nashville.

Bradsher has held many leadership roles over the past four decades, including 32 years as director of the Division of Infectious Diseases in the Department of Internal Medicine.

Bradsher joined the faculty in 1980 and assumed leadership of the Infectious Diseases Division in 1986. He directed the Infectious Diseases Fellowship from 1986 to 2011, and led the division through 2018. Bradsher served as program director for the Internal Medicine Residency, one of the college’s largest, from 1994 to 2007. He was vice chair for education in the Department of Internal Medicine from 1994 to 2019.

College of Medicine classes have voted Bradsher as the most outstanding teacher of the year, presenting him the prestigious Golden Apple award, seven times. Graduating seniors have awarded him six Gold Sash awards as one of their top teachers throughout all four years of medical school. They have chosen him to address their class at Honors Convocation 11 times and have invited him to place their doctoral hoods at an additional 10 Honors Convocation ceremonies. Bradsher has received the student-selected Red Sash award for teaching in 32 of his 40 years on the faculty.

Bradsher is also widely recognized for his contributions to clinical care and research. He is a leading authority in the field of fungal infections, particularly blastomycosis, an infection caused by breathing in microscopic fungal spores that live in the environment and can cause flu-like symptoms, and histoplasmosis, a similarly obtained infection that also causes severe symptoms in some patients. Bradsher and the late Robert Abernathy, M.D., a mentor during his training and early years at UAMS, defined the epidemiology of blastomycosis in Arkansas, conducted the first clinical trials of azole therapy for the infection, and provided cutting-edge care for patients with blastomycosis.

Bradsher is also known more broadly as a masterful practitioner of general infectious diseases and internal medicine. He received the Arkansas Chapter of the American College of Physicians (ACP) Robert S. Abernathy Award in 1996 and was inducted to Mastership in the national ACP in 2012. At UAMS, Bradsher received the Distinguished Faculty Award from the College of Medicine Alumni Association in 1994. He has served as the inaugural Richard V. Ebert Professor of Medicine since 1999. The College of Medicine presented Bradsher its Master Teacher Award in 2004, and he received the UAMS Chancellor’s Faculty Teaching Award in 2006.