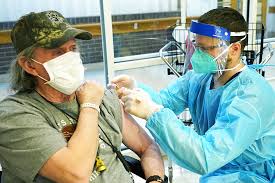 PINE BLUFF, Ark. — It was a busy week for Doctor’s Orders Pharmacy in Pine Bluff. By Wednesday, owner and pharmacist Lelan Stice, said they provided the COVID-19 vaccine to roughly 1,700 Jefferson County residents.

“Making up for the snowstorm, people who weren’t able to get here for their doses last week, and we’re having people reschedule for those this week as well all week long,” Stice said.

Stice said they receive 600 does per week, and they’re able to administer them in about a day in a half.

“We could do it in less than that but that’s all that we’re getting right now,” Stice said.

According to the Arkansas Department of Health, so far the state has received over 887,000 of the Moderna and Pfizer vaccine. Of those, just over 553,000 have been administered, but they say a lot of the doses that have not yet been used are second doses that will be sent out when they’re due.

Stice said between the pharmacy and the hospital, they give around 1,100 to 1,200 doses per week, but they’re limited by who they can provide them to. That’s why he said they’re prepared to start vaccinating those who are 65 and older.

“We book out to around 400 vaccines a day, and the last week or two it’s been pretty slow filling up those clinics with the 70-year-old cap,” Stice said. “Moving it to 65, we’ve booked our clinics for next week already.”

The ADH said Arkansas is starting to see an increase in vaccine supply, but there are still more people wanting to be vaccinated than what’s available. However, they expect production to ramp up, and are hopeful for the approval of additional vaccines.

“As we receive more doses, we will work to increase the supply to our network of pharmacies, clinics and other providers,” a spokesperson said.

Stice believes they could do between 3,000 to 4,000 doses a week if they got enough vaccine in Jefferson County. In the meantime, Doctor’s Orders plans to keep making the most of what they have and get the ball rolling with this new age category.

“I think that will keep us quite busy for another two to three weeks and then we will look at expanding to the next portion of 1B,” Stice said.