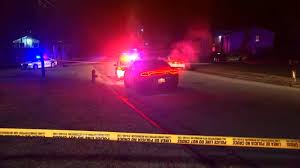 Police responded to the Linden Street Apartments at 1020 S. Linden around 6:48 p.m. and spoke with a person on the scene who said they heard shots coming from one of the apartments.

Officers saw bullet holes in the door of the apartment and gained entry with the help of the fire department.

Inside the apartment, they found Keith Hawkins, 40, lying on the floor with gunshot wounds. He was pronounced dead at the scene. His body has been sent to the state crime lab.

No suspect information has been released. This was the city’s second homicide of the year.

If you have any information about the homicide, you are asked to call 870-730-2090 or dispatch at 870-541-5300. There is a reward for information that leads to the arrest and conviction of any suspect or suspects.