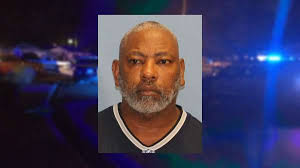 LITTLE ROCK, Ark. — Pine Bluff police have identified the suspect in a fatal shooting that happened on Friday.

Kevin Gray, 48, is wanted in connection to the death of Keith Hawkins, according to police. Officers found Hawkins, 40, inside an apartment on South Linden Street with gunshot wounds.

Police describe Gray as 6’2″ tall and weighs around 220 pounds. He was last seen driving a 2006 white Dodge Charger with Arkansas license plate 431 XKL.

Anyone with any information on Gray’s location is asked to call Pine Bluff police at 870-730-2090 or 870-541-5300. A reward is being offered for any information that leads to the arrest and conviction of the suspect.