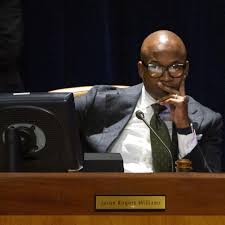 NEW ORLEANS — Prosecutors pushed back against claims by New Orleans City Councilman Jason Williams that the tax fraud charges against him were politically motivated and timed to disrupt his campaign for district attorney, stating that one count against him was 24 hours away from expiring when they secured an indictment.

In a response to a motion by Williams and his law office associate and co-defendant, attorney Nicole Burdett, prosecutors wrote that a three-year statute of limitations was about to run out on one allegation of not reporting income to the IRS.

Williams and Burdett were indicted on 11 counts: one count of conspiracy and five counts each of failing to report cash payments and submitting false tax returns by inflating expenses by more than $700,000.

In a joint motion to dismiss, the defendants argued that “without any legitimate reason to rush the indictment – the tax charges are not close to being prescribed –…the Government pushed ahead.”

But prosecutors Kelly Uebinger and David Ayo contested that claim, writing in a response filed Wednesday that one of the failure to report charges would have expired on June 27, forcing them to seek the indictment on June 26.

“It was important that the case be presented to the next available grand jury in the Eastern District of Louisiana, which happened to be on June 26, 2020,” Uebinger and Ayo wrote.

Williams and Burdett also argued that the COVID-19 pandemic denied them a grand jury which reflects a fair cross-section of the community, especially since the virus disproportionately effects African Americans.

“African Americans are, as a group, at higher risk of severe illness and death from COVID-19 raises serious concerns whether the grand jury in this case was appropriately constituted,” wrote Williams Gibbens and Michael Magner, attorneys for Williams and Burdett, respectively.

The prosecutors countered by noting that the grand jury was “empaneled in August 2019, before the onset of the COVID-19 pandemic.”

Both in the defendants’ motion to dismiss and in comments by Williams, who qualified this week to run for district attorney, the defendants blame their tax problems on their tax preparer Henry “Bubba” Timothy, who they say fraudulently passed himself off as a CPA.

The prosecutors, both assistant U.S. attorneys from the Western District of Louisiana to avoid any conflicts with local federal prosecutors, noted that the charges were approved by the Tax Division of the Department of Justice.

Responding to the claims of political interference, the prosecutors wrote, “The defendants are wrong, as this case is about Jason Williams’ longstanding history of tax fraud and the willingness of his legal associate, Nicole Burdett, to help him violate the law.”

Williams and Burdett have requested oral arguments before U.S. District Judge Martin Feldman on their motion to dismiss.

Target to close its stores on Thanksgiving Day