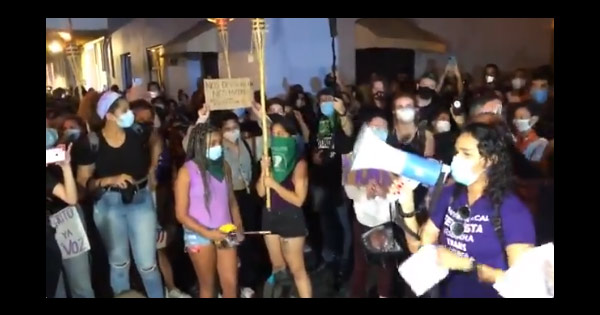 (NEW YORK) — As Puerto Rico struggles to recover from multiple turmoils, including an economic crisis and the COVID-19 pandemic, another crisis plagues the territory: rising violence against women. In the past two weeks, Puerto Rican media has reported the killings of three women and an attack to a transgender woman.

According to data from Puerto Rico’s Gender Equality Observatory, at least 37 direct and indirect femicides have been registered in the island from Jan. 2020 to Sept. 2020.

On Sep. 28, hundreds of Puerto Ricans took to the streets demanding that the government take action, and urging Gov. Wanda Vázquez to declare a state of emergency. Protesters held signs in Old San Juan that read, “Estado de Emergencia YA,” (“State of Emergency Now,” in English) and “Ni Una Más Ni Una Menos,” (which roughly translates to “Not One More, Nor One Less”).

Hours before the protest, authorities confirmed the death of Rosimar Rodríguez, a 20-year-old woman who was kidnapped on Sept. 17 and found dead inside a car in Dorado, Puerto Rico. Officials are still investigating her death.

As of Oct. 5, at least 12 women, including five underage girls, remained missing in Puerto Rico, according to Puerto Rico’s Gender Equality Observatory.

The situation, unfortunately, is nothing new for the island. But still, activists, nonprofit organizations, community and state leaders and citizens are continuing to plead for change. Most recently, a movement against violence toward women erupted on social media.

“Before Hurricane María and Irma, we had denounced a call for a state of emergency because we had seen how all the institutions were not addressing the issue as a priority,” said Lourdes Inoa Monegro, the program director at Taller Salud, a nonprofit feminist organization that’s been helping women deal with the ongoing violence against them.

While Inoa Monegro said violence against women was already an issue that was being widely ignored on the island, it got even worse after both hurricanes caused destruction in the territory.

“At that moment, we didn’t have the statistics, but we had our ears,” she told ABC News.

Through the community, the organization learned that violence against women was on the rise in the island.

Inoa Monegro said women in the community told her, “‘I fear for my life or my security. And I don’t see where to go, statewise.””

After Hurricane María, domestic violence murders doubled, according to a recent investigation from gen.medium and Type Investigations: “At least 23 women on the island of 3.2 million were killed by their current or former intimate partners that year [2018], causing the intimate partner murder rate to soar to 1.7 per 100,000 women, up from 0.77 per 100,000 in 2017.”

No new data about domestic violence killings has been reported since 2018, according to gen.medium.

“We have denounced in various occasions, the disaster that the hurricane provoked was not all natural. It was also a political disaster on how to address the issues of quality of life and safety for the people in Puerto Rico,” Inoa Monegro said.

Her concerns include the wellbeing and safety of all women on the island.

“We want to see action taken,” she said. “We need the state to do something about it.”

A draft of an executive order that would address violence against women in the island is being reviewed by Gov. Wanda Vázquez, stated a press release issued by the governor’s office.

Although Vázquez — whose term ends in January — acknowledges the gender violence crisis on the island, the press release doesn’t mention the possibility of issuing a state of emergency. Just last week, the governor endorsed President Donald Trump for reelection, despite the widespread criticism over his handling of Puerto Rico’s hurricane relief.

Inoa Monegro said citizens’ pleas for a state of emergency from the local government have not been heard. ABC News reached out to the governor’s office to ask about demands on the state of emergency, but no response was received.

An official state of emergency would give the island resources to deal with gender violence in Puerto Rico.

“We are in a war, and every day we lose a soldier,” said Joanna Cifredo, an activist and transgender woman.

Cifredo is one of the many women who has taken to the streets to protest with the purposes of seeking change.

“For Alexa, for Serena, for Penelope, for Yampi, for Layla, for Kevin, for Rosimar and for all the others that were taken from us. We demand the government to declare a state of emergency due to ‘violencia machista’ (roughly translates to misogynist violence),” Cifredo wrote in her social media channels during the Sept. 28 protest.

This year, six transgender women have been killed in Puerto Rico. Last week, local authorities reported that a 33-year-old transgender woman, Nicole López, was hospitalized after being stabbed and beaten.

“Being with our sisters is what heals us,” Cifredo told ABC News.

She said that every time there is an alert that another woman has been killed, she tries to gather with other women to seek comfort.

But, of course, finding safe ways to reunite with loved ones amid the pandemic has been challenging.

Taller Salud had to rearrange their strategy entirely, and although they were able to adjust to remote services, Inoa Monegro said these are “stressful times,” for many women.

“It definitely hasn’t been easy… that idea that home is a safe environment for women is a fallacy, it is not true,” she said.

Once COVID-19 cases started rising in the mainland, Puerto Rico implemented one of the strictest lockdowns in the nation, including a curfew that is still in effect.

“Being at home 24/7, or most of the day, has taken a toll on their mental health and on their ability to cope with violence,” said Inoa Monegro.

While the recent news has taken a toll on many residents in the island, especially women, both Inoa Monegro and Cifredo said nothing will stop them in their fight against violence toward women.