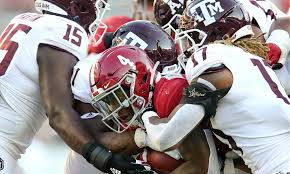 For the 11th time in 15 years, college football’s national champion resides in the Southeastern Conference.

SEC performance of the year

Miller: Here begins my DeVonta Smith love affair, but his Dec. 5 performance in Tiger Stadium was one of the greatest ever seen in Baton Rouge. He went off for 231 yards and three touchdowns on eight catches, yeah, but it was the way he did it — 65 yards for a touchdown, 61 yards for a touchdown, ridiculous cut back for 48 more. It was a superstar-level takeover, simply playing with the LSU defense. It was the night he truly convinced college football he was the best player in the nation, going from fringe candidate to Heisman Trophy…

New Coach With Wide Receivers, But Many Familiar Faces Return to Razorbacks