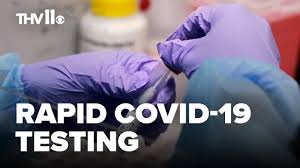 Arkansas – The Arkansas Department of Health has begun receiving equipment to do rapid antigen testing, which gives COVID-19 results in under 30 minutes.

While the state is still waiting on supplies, some places are already set up with antigen testing.

“The demand for it has certainly been overwhelming,” Anne Pace said.

Anne Pace is the owner of Kavanaugh Pharmacy, which is one of the only places in Arkansas offering antigen tests. She said the test is about 94 percent accurate.

“It is pretty unlikely to get a false positive and has a pretty low false negative rate,” she said.

Dr. Jennifer Dillaha with the Arkansas Department of Health said these tests can be almost as accurate as a PCR test, which is the “gold standard” for viral testing. Both tests require a nasal swab.

While antigen tests can be much faster, they also have to be run individually, making mass testing difficult.

“The PCR tests you can do mass testing and collect a lot of samples and run them the next day,” Dillaha said.

Antigen tests are a good option if you need to get back to work or see family. But, it does come at a cost.

“We are unable to bill patients insurance, so it is 95 dollars,” Pace said.

Pace said some patients have had success manually billing it to insurance. She can also only handle about 40-50 tests a day.

“There has been a supply issue, just last week we got another shipment but we have no guarantees of when we’ll have our next shipment in and we’re going through them far more than we can keep up with,” she said.

Pace is only taking patients by appointment only.