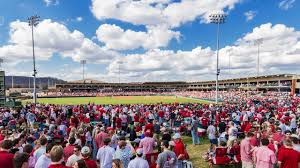 In a story first reported by the Arkansas Democrat-Gazette and confirmed to the Pig Trail Nation on Monday the Arkansas Razorback Baseball team will host Arkansas State, Little Rock, UA-Pine Bluff and the University of Central Arkansas at Baum-Walker Stadium. Dates and times of the games in the 2021 season are still to be determined.

This will mark the first time the Razorbacks have played the Red Wolves and the Bears on the diamond. The Hogs played the Trojans and Lions in 2019 and were scheduled to play those teams again in 2020 before the season was canceled due to COVID-19.

Arkansas head coach Dave Van Horn told Tom Murphy of the Arkansas Democrat-Gazette, “I think that playing each other will grow our game and help make it more popular.”

“I think playing the other schools is gonna be great. Obviously it’s going to be a battle playing those guys on Tuesdays and Wednesdays between conference series. But at the same time, it’s just good for everybody involved.”

The move to schedule Arkansas State and UCA happened last week when Hunter Yurachek announced that those schools would be available to compete against in all sports outside of football starting next year in a move to help all schools with travel costs.