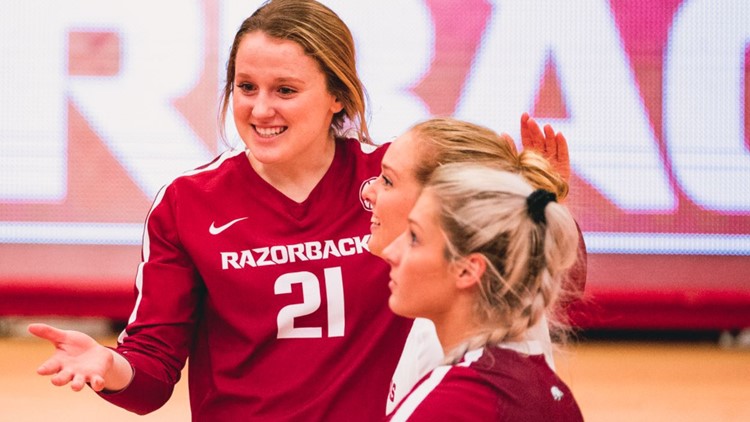 Gillen and Evans were targeted a combined 77 times in serve receive this weekend and were a key part of Arkansas committing a season-low two reception errors in the week’s first match. Evans did not commit an error over 38 serve receptions on the weekend.

Gillen brought her A-game to Athens, outperformed her season average in every offensive category: kills per set, hitting percentage, assists per set and aces per set. She also contributed 22 total digs (3.14 per set) and two crucial solo blocks. In Thursday night’s win, she notched her 15th career double-double with 22 kills and 13 digs, while tying her career-high with four service aces.

Evans continues to be a defensive stronghold for the Razorbacks, officially recording double-digit kills in 11 of 12 matches over the course of the 2020-21 campaign. She tallied 27 digs in the series sweep, averaging 3.86 digs per set.

Ryan earned her sixth double-double of the season in Friday’s win, bringing her total to 13 career double-doubles in the cardinal and white. She has recorded 20+ assists in all 12 matches this season, ranking her second among all SEC setters in assists per set (10.41) and first for total assists (479). Ryan also held her own defensively registering 17 digs and eight total blocks during the series. The Florida native even notched a career-high five total blocks against Georgia on Thursday.

Arkansas will host Alabama next, as the Tide comes to town on Feb. 12 for a two-match series starting Friday night at 7 p.m. CT.

Musselman recognized by MiLB for his support of the minor leagues