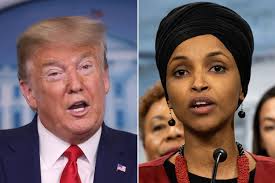 WASHINGTON – Minnesota Rep. Ilhan Omar, a frequent target of President Donald Trump’s, is blasting him for what she calls “actively spreading a deadly virus.”

Omar said earlier this year that her father died of the virus, and she said in a statement Friday that she doesn’t wish it on anyone.

Omar, a Democrat, says the nation has been waiting for months to hear Trump say America “will get through this together.” And she says he’s saying that now because it’s about him.

Trump announced earlier Friday that he and the first lady had tested positive for the coronavirus.

She criticized Trump for holding a rally and fundraiser this week in Minnesota without wearing a mask, saying he exposed hundreds of people in a state where cases are already rising.