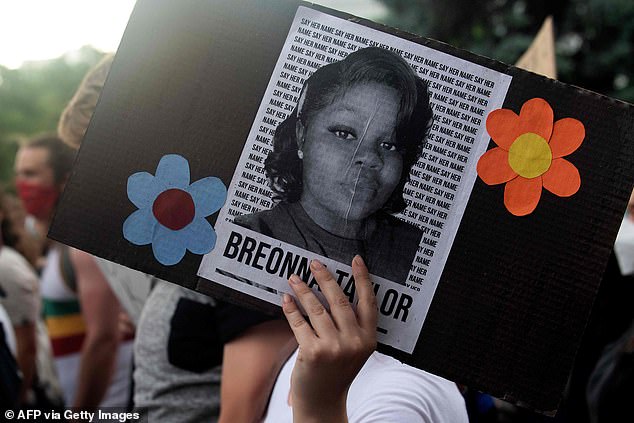 (NEW YORK) — Six Louisville Metro Police officers are under an internal investigation into their actions related to the fatal shooting of Breonna Taylor, a police spokesman told ABC News.

The department’s Professional Standards Unit has begun its probe into Det. Myles Cosgrove and Sgt. Jonathan Mattingly, who fired their weapons into Taylor’s apartment on March 13; Det. Joshua Jaynes, who sought the search warrant for her apartment; and Det. Tony James, Det. Michael Campbell and Det. Michael Nobles, according to spokesman Sgt. Lamont Washington.

Internal investigators will see if the officers violated any police policies during the incident, the spokesman said. Disciplinary action could include written reprimand and extend all the way up to termination, according to Washington.

Taylor, 26, and her boyfriend, Kenneth Walker, were sleeping inside their Louisville apartment when three plainclothes officers — Mattingly, Cosgrove and Det. Brett Hankison — attempted to execute a “no-knock” search warrant. The officers were investigating a suspected drug operation linked to Taylor’s ex-boyfriend.

Walker said he received no response from the other side of the door when he called out after the officers rammed the door.

Walker took his licensed firearm and shot at the door, and the officers returned fire, striking Taylor eight times and killing her in her sleep, according to investigators. No drugs or drug money were found in the apartment, investigators said.

Taylor’s death has sparked nationwide protests against police violence targeting minorities and strong calls for the officers to be charged.

The officers were placed on administrative duty following the incident, and Hankison was fired. The incident is currently under investigation by state Attorney General Daniel Cameron.

Cameron has not given a timetable for when he will reveal the findings of the investigation, but the police are already preparing for it.

Louisville Metro Police Chief Robert J. Schroeder issued a state of emergency for his department Monday in anticipation of an update on the state investigation.

In two memos sent to officers, Schroeder said the department will be increasing its staffing ahead of Cameron’s pending announcement.

All requests by officers for time off and vacation will be canceled, according to the memo.

“To ensure we have the appropriate level of staffing to provide for public safety services and our policing functions, effective immediately the LMPD will operate under the emergency staffing and reporting guidelines,” Schroeder wrote in his memo.

On Sept. 15, the city of Louisville reached a $12 million settlement with Taylor’s family, who filed a wrongful death lawsuit against the police. The settlement included a commitment by the city to institute police reforms.

US parents delaying preschool and kindergarten amid pandemic