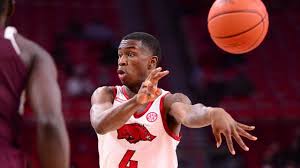 He made up for lost time in the rematch, scoring 19 points to help the Razorbacks beat the 10th-ranked Tigers 86-81 in overtime on Saturday.

Smith had ankle surgery the day before the teams’ first meeting on Jan. 2 and could only watch as Arkansas (16-5, 8-4 Southeastern Conference) lost that game. The grad transfer from Indiana is healthy now, and it showed. He shot 6 of 10 from the field, grabbed six rebounds and dished three assists.

“He came back with vengeance this time,” said teammate Moses Moody, who scored 16. “He had a different look in his eye.”

On Saturday, it was Missouri (13-5, 6-5 SEC) missing a key player. Standout forward Jeremiah Tilmon missed the game because of a death in the family. Tilmon had 25 points and 11 rebounds in the teams’ previous meeting, and without him, the Tigers leaned heavily on 3-pointers, making 13 of 32 from beyond the arc.

Xavier Pinson led the Tigers with 23 points, and Dru Smith added 15. Missouri erased a four-point deficit in the final minute of regulation. Parker Braun sent the game into overtime when he scored a reverse layup off a nice feed from Dru Smith to tie the game at 73 and then blocked Devonte Davis’ shot on the other end.

Justin Smith opened overtime with a layup and then delivered a thunderous dunk on an alley-oop pass from Jalen Tate.

“Justin Smith, I think he was looking into the basket when he dunked it,” said Missouri’s Torrence Watson.

This was Justin Smith’s fourth game since returning from his injury, and his production has increased with each. Arkansas coach Eric Musselman called it Smith’s best game as a Razorback.

With 18 seconds left in overtime, Missouri briefly took a one-point lead when Tate was called for goaltending on a Dru Smith layup attempt. However, officials checked the replay and saw that Tate blocked the shot before it touched the backboard.

The points came off the board, but that wasn’t much consolation to Musselman. The Razorbacks had rebounded the blocked shot, but the ball is dead when goaltending is called, so Missouri was awarded the ball based on alternating possession. But it all worked out in the end, when Moody stripped the ball from Braun on the ensuing possession and converted two free throws after he was fouled.

“All those little intangible winning plays is what he’s all about,” Musselman said.

Connor Vanover is hard to miss at 7-foot-3, but he was absent in the first half. He played just four minutes and didn’t score. In the second half, Vanover came alive to help turn a 35-31 halftime deficit into 58-51 lead with 11 minutes left in regulation. He scored 12 points.

Vanover hit two 3-pointers, which wasn’t a big surprise, but he also posted up and scored down low. Missouri covered Vanover with guards because he so rarely plays inside.

“Connor going down on the block was something other teams haven’t seen us do,” Musselman said. “How would they? We haven’t done it before. … We threw it in to him and ran a play about four straight times that we haven’t run one time this year. We had to diagram it in a timeout.”

Vanover had a dismal game the last time against Missouri, going 0 of 11 from the field. This time, he made 5 of 7 shots.

“I was really looking forward to this game,” Vanover said. “Not only was it a Top 10 team, but it was redemption.”

Missouri: The NCAA Tournament selection committee revealed its current top 16 teams on Saturday, and the Tigers received a No. 4 seed as the No. 16 team overall. Missouri earned that spot thanks in large part to victories over two No. 2 seeds (Illinois and Alabama) and one No. 3 seed (Tennessee). Consecutive losses, though, raise some concerns that the team is trending in the wrong direction late in the season.

Arkansas: The Razorbacks won their sixth straight SEC game — sandwiched around a nonconference loss to Oklahoma State — and this one should come in handy on their NCAA Tournament résumé. Missouri is the first AP Top 25 opponent Arkansas has beaten this season.