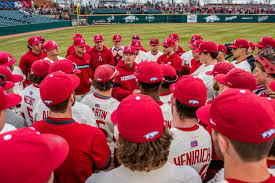 University of Arkansas Director of Athletics Hunter Yurachek has authorized all athletic teams except for football to schedule Arkansas State.

The Arkansas Democrat-Gazette reports that the Arkansas is open to playing more in-state opponents like Arkansas State or Central Arkansas.

Razorback coaches are free to schedule A-State or UCA in all sports except for football.

Athletic departments across the country are looking to cut travel costs in the midst of COVID-19. So more matchups against teams that are reachable by bus instead of by plane.

The Hogs initially rolled out their plan in 2018 to play in-state opponents within the UA System.

Arkansas Recruiting 2021: 5 targets and how June could be a telling month