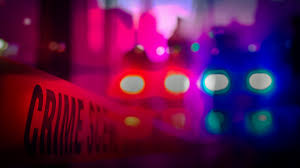 STONE COUNTY, Ark.- Arkansas State Police say two people are dead and a man is in custody in connection to their deaths.

According to state troopers, two apparent murder victims were found inside a home on Chateau Pointe Loop off of Arkansas Highway 87 north of Mountain View Tuesday afternoon.

State police have identified the victims as Ronald Calkins, 64, and Brandy Patrick, 40, both of Mountain View.

Authorities say the bodies have been taken to the Arkansas State Crime Laboratory, where the state medical examiner will determine when and how the victims died.

Investigators said a person who may have taken a truck from the crime scene was identified as a suspect in the case.

State police CID special agents and the Stone County Sheriff’s Office noted they received information Tuesday night that the suspect was possibly in the Fifty-Six community, north of Mountain View.

The authorities found the suspect, who was identified as 43-year-old Royce Calkins, the son of Ronald Calkins. State police say Royce Calkins lived with his father at the Chateau Pointe Loop home.

The younger Calkins was arrested and is being held at the Stone County jail, where state police say he is facing a first-degree murder charge.