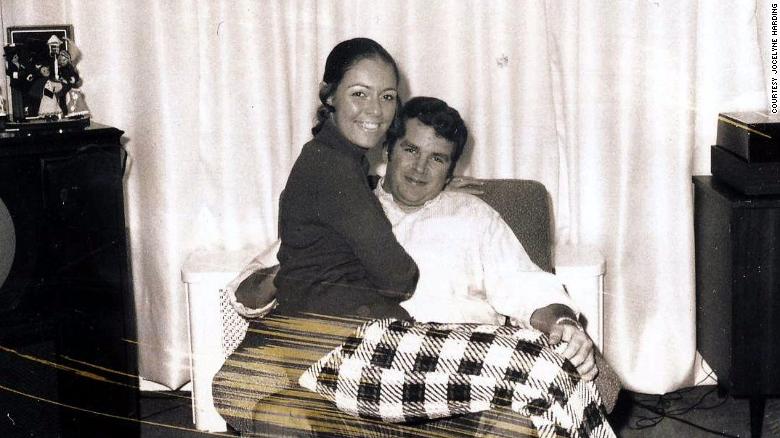 “As I’m pouring the coffee in his cup, he looked up at me with those amazing blue eyes. Naturally, I poured the coffee into his cup. Unfortunately, at the same time I poured tea into his lap”

Jocelyne Harding
Mala suggested they invite both the flight’s security officers to a crew party she was planning at her Queens apartment after they landed.
Jocelyne agreed and returned to economy to tell Tyler and hurriedly pass on the address before making preparations for final descent.
After landing, she couldn’t spot him amid the crowd, and felt disappointed as she traveled from JFK to Mala’s home. He was nowhere to be seen as the party got into full swing. Then the doorbell rang.
It was Tyler, with his fellow security officer in tow.
“It took my breath away. It really did,” says Jocelyne.
Right away, the pair went to the kitchen and started chatting over cocktails.
“I was leaning against Mala’s range with my back to the ring. He was standing in front of me and we must have talked for about three hours.”
The pair discussed their childhoods — hers in New York and his in California — their families, dreams, travels, careers.
The only thing off the table was the true nature of his job — Tyler couldn’t reveal he worked for the CIA. She found that out later.
Tyler and Jocelyne ignored the hubbub of the party around them, chatting incessantly.
“At the end of the evening, he looked at me, and he said: ‘Will you marry me?'”
Her answer, she says, slipped out instinctively, in a moment of clarity and assurance. “I said, ‘Yes.'”

After the party, Tyler and his colleague gave Jocelyne a ride back to her parents’ home in New York, where she couldn’t help but blurt out her fateful news.
“I just met the man I’m going to marry,” she told her mother, who laughed.
“Oh, you’re crazy. It doesn’t work that way,” she said.
But the very next day Tyler called round to see Jocelyne and meet her parents, hitting it off with them too.
Neither Tyler or Jocelyne had much time in New York City before they were heading on their next work trip — he to Tehran and she to Rome.
“I can’t actually marry you yet,” Jocelyne told him, before he departed. “That would be ridiculous.”
Tyler just smiled and left his 1968 Mustang parked in her parents’ driveway.
In Rome, Jocelyne had plans lined up with a man she’d been casually dating during her Italian layovers.
“He had a whole weekend plan to take me in his sports car up the Amalfi Coast,” she recalls.
Upon landing in Italy, she called him up and, despite his protestations, told him she wouldn’t be able to come after all.
Instead, she spent the weekend in Rome with Mala and her other Pan Am colleagues, walking around the city, throwing coins in the Trevi Fountain, and enjoying pasta dinners.
When Jocelyne got back to New York, Tyler contacted her right away. Ostensibly, it was under the excuse he needed to collect his car, but they both knew that wasn’t the real reason.
The two started dating, spending all their time together when they weren’t traveling for work.
That October, just a few weeks after they met, Tyler asked Jocelyne to marry him — again. This time, she said yes with certainty.
They told their parents on Thanksgiving, and on Christmas Eve 1970, Tyler met her at JFK with an engagement ring.
Jocelyne and Tyler got married March 1971, at the chapel of the College of Mount St. Vincent. For their honeymoon they flew to Fiji, taking advantage of Jocelyne’s Pan Am discount to travel first class and spend eight days relaxing.
Back in the US, she moved to Alexandria, Virginia, where Tyler was based, but still flew out of New York.
“We both travelled a lot,” says Jocelyne. “He went on assignment often for the CIA, and that first Christmas, I remember he was gone for three months on an assignment to Laos, and that was tough.”
When she could, Jocelyne tried to work round-the-world flights out of New York, so she’d be gone for weeks at a time too, traveling from New York to Tokyo and back.
“I thought, ‘I can’t believe I’m doing this,’ because there was a war going on there then. But I did, and I met him, and we came home together after his assignment. And from then on, it’s just been a whirlwind.”
In March 2021, Jocelyne, now 74, and Tyler, 80, will have been married for five decades.
“I can’t believe it’s 50 years already,” she says. “I can’t believe it.”
Related content

The glamor of Pan Am

Jocelyne continued flying with Pan Am for a year after her marriage. Regulations had just recently changed to allow married women to continue working as flight crew.
But she left the company in 1972, when Tyler’s job transferred to Thailand.
Jocelyne said farewell to her wings with great sadness, but soon embraced the new adventure of a life in Southeast Asia, followed by a stint in Hawaii. The couple had their first child, a daughter, while living in Honolulu.
Tyler and Jocelyne then settled back in Virginia for a while, having a second daughter there, but before long they were living in Frankfurt, Germany.
Related Topics:featured
Up Next

Is drinking milk really a risk factor for breast cancer?