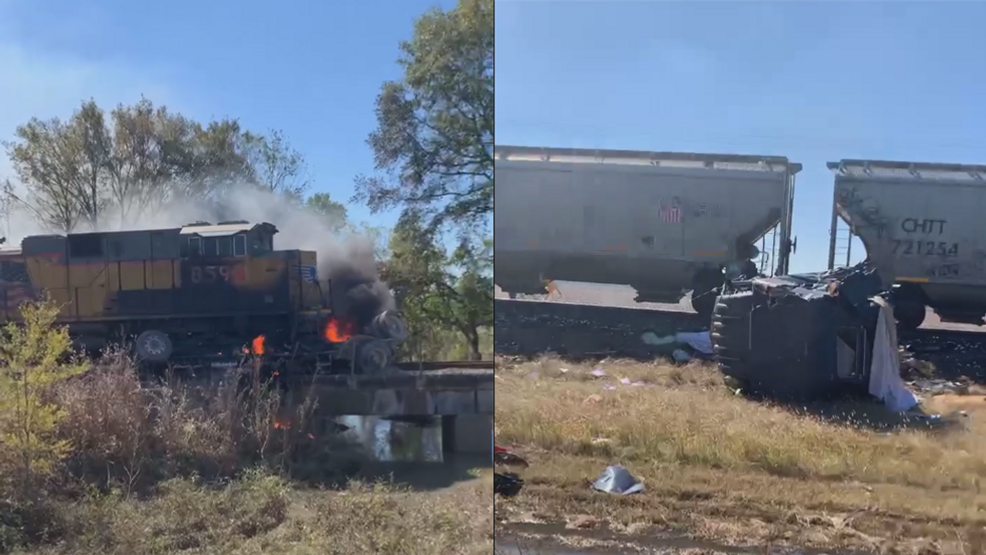 Pine Bluff, Arkansas – A fiery collision between a train and a semi-truck southeast of Pine Bluff left one person hospitalized Friday afternoon.

It happened at U.S. 65 and Klie Road in Grady. Video posted on Facebook at 12:31 p.m. shows a train stopped on a railroad that runs adjacent to the highway. Underneath the train is the burning wreckage of a semi-truck. More wreckage can be seen down the highway near a railroad crossing.

A fiery collision between a train and a semi-truck left at least one person injured in Grady, Ark. (Video courtesy of Merissa Waddy)

A witness said the semi-truck was torn in half.

The video shows a man, believed to be the truck driver, lying on the ground surrounded by a group of people.

The Jefferson County sheriff’s office identified driver as Dustin Kebodeaux, 35, of Louisiana. The sheriff’s office said he was ejected 35-40 yards from the vehicle. Kebodeaux was taken to UAMS Medical Center in Little Rock for treatment. He was “alive and responsive.”

The sheriff’s office said Kebodeax, who was hauling a trailer of cotton, refused to yield at a railroad crossing stop sign.