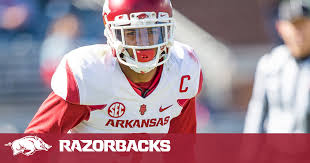 FAYETTEVILLE, Ark. – Arkansas redshirt senior infielder Braxton Burnside, redshirt junior outfielder Hannah McEwen and redshirt senior pitcher Autumn Storms have been named to the 14th annual Preseason All-SEC Softball Team. Alongside LSU (4) and Alabama (3), the Razorbacks are one of only three squads with three or more players appearing on the team.

After sitting out 2019 due to NCAA transfer regulations, Burnside made a splash on The Hill, hitting .392 with a team-leading 31 hits while starting all 25 games at shortstop in the COVID-19 shortened 2020 season. The Paragould, Ark. native slugged a team-best .620 with three doubles, five home runs and 20 RBI and reached base at a .467 clip. She also collected 49 total bases, 17th most in the SEC. Her 11 multi-hit games and nine-game hitting streak were both team bests.

Making her second straight appearance on the Preseason All-SEC Team, McEwen registered the nation’s 15th best on base percentage (.565) with a team-leading and eighth-best in the SEC .418 batting average last year. She also led the Razorbacks totaling six doubles and 19 walks, which finishing second on the team in hits (27). A career .371 hitter, the top mark in program history, McEwen is also the SEC’s only player to lead her team in batting average each of the last three seasons.

Last year, Storms racked up an SEC-leading 11 victories inside the circle and ranked second in the conference allowing 1.16 walks per seven innings, fourth in strikeout-to-walk ratio (5.08) and seventh in ERA (1.16). She also led the team posting a 1.05 WHIP and a .225 opponent batting average. The veteran began the season winning seven consecutive decisions and did not allow more than three earned runs in any appearance all year. Her 59 career wins are third-most in school history and ranks fifth in ERA (2.07) and opponent batting average (.245). Like McEwen, Storms is appearing on the Preseason All-SEC Team in back-to-back seasons.

The Preseason All-SEC Softball Team is voted on by the league’s head coaches and consists of a minimum of 14 players. Each SEC head coach voted for five infielders, four outfielders, three pitchers, one catcher and one designated player/utility. No ties were broken.

Arkansas – ranked No. 18 in the USA Today/NFCA Coaches Poll and No. 21 in the ESPN/USA Softball Poll – opens its season playing five games at the Best on the Bayou Classic in Monroe, La., including a matchup against No. 11 Oklahoma State. The home opener is slated for a 3 p.m. first pitch on Thursday, Feb. 25 in a doubleheader against North Dakota State.