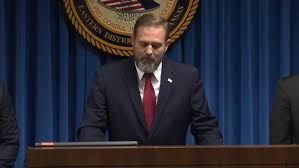 After his resignation, the 48-year-old Hiland says he plans to pursue opportunities in the private sector.

He had previously served as the elected Prosecuting Attorney for the 20th Judicial District of Arkansas.The opportunity afforded me to represent the exceptional people of this great nation as a  United States Attorney has been the highest honor and most fulfilling duty of my public career. I can think of no higher calling nor any greater responsibility in the legal community than the privilege of bearing the burden of seeking justice. It is a sobering responsibility that requires the discipline of emotion, the sharpness of mind, and a love for both the people you serve and the Constitution that protects us all. The pursuit of that purpose is, in itself, a great reward. But doing so alongside the committed public servants that work in the U.S. Attorney’s Office and possess those rare qualities is a gift that I will always cherish. That the Assistant U.S. Attorneys in this small district has the sixth-largest caseload out of 94 districts is nothing short of remarkable and is a testament to their commitment and work ethic. Any success attributable to this office over the last three years belongs to each and every member of our staff. I am simply proud to be associated with their tireless efforts.

Kamala Harris’ replacement in US Senate ready to work, ‘gettin’ it done’