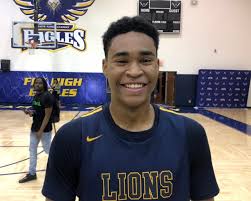 LITTLE ROCK — Arkansas’ pursuit of players in Dallas-Fort Worth has historically tanslated to proven success in most Razorbacks sports, and the Hoop Hogs continue to seek recruiting fortunes in the talent-rich Texas metropolis.

2022 Colin Smith (6-8 combo forward, Dallas St. Mark’s, national No. 59 / 4-star propsect according to Rivals.com) picked up his Hog offer on July 1, and as 2020 winds down Smith confirmed on Thursday that he maintains contact with Arkansas’ coaching staff.

“We talk regularly and I get well wishes before games and they are the only school that provides a play-by-play breakdown of my games,” Smith said of the nature of his ongoing recruitment by the Hogs’ coaching staff.

Smith is averaging a double-double through two games: 19 points, 11 rebounds, 5 assists, 2 steals, and 2 blocks for 2-0 St. Mark’s. Hog fans likely remember the St. Mark’s program for producing 5-star combo forward Harrison Ingram, who had the Hogs high on his list of potential college destinations before committing to Stanford.

“We have only played two games so far,” Smith said. “We started the season with only three practices and we are required to play in masks.”

“UNC says they want to see me in person,” Smith said. “Love my game and versatility but haven’t been able to see me live and that’s one of the things they do before offering any prospects.”

Smith — he included the Hogs among 12 teams he said are recruiting him the hardest — is in no hurry to name a list of finalists let alone announce a commitment.

“I will probably cut it either before the summer or after,” Smith said. “I don’t really have a concrete commit timeline. Covid has really hindered some of the visits and things my family and I had planned.”

Smith is long, skilled, and a smooth offensive finisher at all three levels.

* Much has been made of the six 2022 in-state prospects who hold offers from the Arkansas Razorbacks — Hogs commit Joseph Pinion of Morrilton, Nick Smith, Jr. of Sylvan Hills, Derrian Ford of Magnolia, Kel’el Ware of North Little Rock, Creed Williamson of Little Rock Christian Academy, and Javion Guy-King of Little Rock Mills — but there are plenty more NCAA Division 1 caliber prospects in the junior class with some on the fringes of potentially emerging as high-major prospects.

Daughtery is a talented and fierce combo guard who’s added an effective volume three-point shooting game to his offensive aresenal. He’s averaging 18.4 points (41% shooting from 3), 5 rebounds, and 3 assists for 5-2 Maumelle. He recently picked up his first D1 offer from UCA.

West is a long, bouncy forward who plays above the rim as a rebounder, finisher, and rim-protector, and his face-up mid-range game is emerging. West holds D1 offers from UCA and Arkansas-Pine Bluff with St. John’s and Missouri among the high-major programs showing interest.

Williams is a sharpshooter from distance but also has a determined slash-and-finish game. The son of Arkansas assistant coach Corey Williams, CJ Williams is averaging 22.8 points through six games at Fayetteville. He has a D1 offer from Alcorn State with several more D1 progams showing interest and recruiting him.

* Reminder that 2022 Arkansas offer Ramel Lloyd, Jr. (6-6 combo guard, Rancho Christian in Temecula, Calif., composite national No. 60 / 4-star prospect) is expected to announce his top 10 schools on Tuesday, Dec. 22. Lloyd recently had a virtual meeting with Arkansas coaches (you can read his thoughts on that by clicking the link below to my Dec. 1 version of the Hoop Hogs recruiting notebook).

* Last week we reported on several big-time in-state matchups between 6 Arkansas offers from the 2022, 2023, and 2024 classes, but we failed to include links to highlights from those games. For details on the matchups, click the link below to my Hoop Hogs recruiting notebook published on Saturday, Dec. 12. And to finally see the highlights from those games of Pinion, Smith, Williamson, 2023s Bryson Warren and Layden Blocker, and 2024 K. Annor Boateng, here are the links to those …