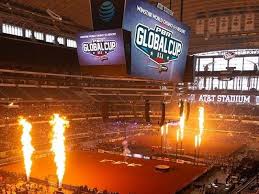 LITTLE ROCK — In less than a week, four of the Arkansas Razorbacks’ top recruiting targets are expected to take part in the Coach Wootten’s Top 150 Boys event in Mansfield, Texas, marking the most important evaluation opportunity of the year given that the coronavirus pandemic shut down the three major shoe circuits’ 2020 grassroots seasons.

Class of 2021s Chance Moore and Trey Alexander as well as 2022s Nick Smith, Jr. and Ramel Lloyd, Jr. — all priority Hog targets — are among the 150 players who were selected for the prestigious camp set for Saturday and Sunsday (Oct. 24-25) in Mansfield, Texas. Wootten’s 150 invitees are reportedly based on ESPN’s Top 100 prospect rankings for 2021 plus its Top 50 for 2022, and the two-day event has been billed as an evaluation platform for the 2021 McDonald’s All American game.

“I feel like it’s a great opportunity for me to show what I can do,” Smith said. “Just blessed to get the chance.”

Moore — in August he became Arkansas second-year head coach Eric Musselman’s first commitment for the 2021 class — just had a strong run competing in the talent-loaded Georgia Elite Fall League as he averaged 25.2 points per game through six contests. Moore is planning to sign his national letter of intent with the Razorbacks during the early signing period that begins next month.

* As of last week, Arkansas has expressed interest in and inquired about 2021 Dreshaun Doyne (6-7 wing / small forward, Southern California Academy by way of Maumelle).

Doyne’s Division 1 recruitment began picking up in August, and that attention began exanding to high-major D1 programs in the past week following Doyne’s impressive showing last weekend (Oct. 10-11) at the Pangos Best of the West camp.

According to a source, Arkansas associate head coach David Patrick inquired about Doyne on Thursday.

“My head coach from school talked to the assistant coach at Arkansas about me (Thursday) but I haven’t talked to him personally,” Doyne said. “Hopefully they will reach out this weekend or sometime next week.”

“I just played good with a high motor and high energy,” Doyne sid, “also I played very aggressive on the defensive end. Some coaches called my style of play a ‘junk yard dog’ or a PB ‘passion bucket.’”

Last season, Doyne played his junior year of high school basketball at Maumelle, a program that consistently produces D1 talent, including class of 2018 big man Ibby Ali who was a member of the ’18-19 Razorbacks squad before transferring to Tulane following his freshman season.