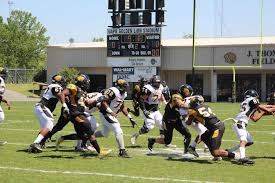 PINE BLUFF, Ark. – Game-like situations have been the emphasis of practice as the University of Arkansas at Pine Bluff football as fall camp continues.

Down, distance, and field position dictates decisions on the next play on the gridiron. For play-callers, coordinators, and head coaches, the chess match against the opposite sideline counterpart speaks to the game-within-the-game concept of matching wits of schemes and designs.

Those concepts are forged here in the offseason, and first-year head coach Doc Gamble has taken his group of Golden Lions through various down-and-distance elements of games during practice.

“We’re trying to address things now that we might see during the regular season,” Gamble said of the recent practice sessions that have included red-zone situations and overtime periods, among others. “You do them in practice, and when the situation happens in the game, we can always refer to it with our players that we covered this in practice and remind them of it. We’re still installing our overall concepts, not in a game-planning perspective, but putting the ball in certain areas of the field and taking our players through those various situations.”

And while football coaches nationwide try to prepare their teams for every likely game situation in practice, one element they can not control is weather conditions. From temperatures in the 80s that opened the week seven days ago to cloudy, misty, rainy conditions in the low 50s over the past four days, combined with the upcoming spring football schedule that begins in late February, the climate change also helps to prepare the players for the unprecedented season.

“Whatever the conditions yield, we’ll have to play in them; that’s for sure,” Gamble said. “The benefit for us is what we’re facing now will likely be the same elements we’ll have when we come back for training camp in January. It allows us to get used to it now.”

Arkansas Falls To No. 9 Mizzou In Series Finale

At Arkansas, walk-ons help get Razorbacks defense up and running