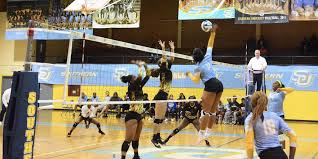 UAPB’s defense held Southern to only 35.6% shooting from the field, including 14.3% from beyond the arc.

After falling behind 12-6, UAPB went on a 6-0 run with 3:25 left in the first quarter to tie the game at 12. Southern then pulled ahead, sending the Lady Lions into the second quarter down 18-14.

Southern kept adding to that lead, building a 28-22 advantage before UAPB went on a 5-0 run, highlighted by a bucket from Marquita Cotton, to narrow its deficit to 28-27.

The Lady Lions were unable to narrow the gap any further, but didn’t lose ground either and entered halftime with a 33-32 deficit.

However, an early third-quarter run gave Southern a double-digit advantage it would not relinquish.

The Lady Lions return to action Monday in a 1 p.m. game at Alcorn. The UAPB Sports Radio Network broadcast begins at 12:45 p.m. on 99.3 FM The Beat, online at uapblionsroar.com/live and on the free UAPB Athletics App.