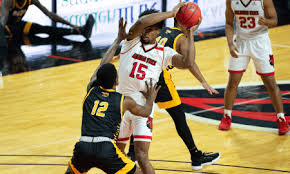 A strong team effort led the University of Arkansas At Pine Bluff women’s basketball team to an 81-59 win over Miss. Valley State Saturday at the H.O. Clemmons Arena.

The win, combined with Alabama State’s loss to Grambling, placed UAPB in a tie for seventh place. The Lady Lions have the tie-breaker over ASU and Arkansas at Pine Bluff enters the Cricket Wireless SWAC Tournament as the #7 seed and will travel to face #2 seed Texas Southern Tuesday at 5:30 p.m.

The Lady Lions (7-21, 6-12 SWAC) had five players score in double figures, led by Noe’ll Taylor, who had 16 points and six rebounds. Aiya El Hassan tacked on 16 points, eight rebounds, four steals and two blocks and Kyeonia Harris chipped in as well a double-double with 13 points and 11 assists.

Seniors Taylor, El Hassan, Harris, Katherine Darden, and Sha’Kendra Tilley each played their final home game and were honored on the court following the victory.

Trailing 21-16 after one, UAPB then started off the second quarter by going on a 12-0 run, highlighted by a bucket from El Hassan, to take a 28-21 lead. The Lady Lions proceeded to tack on six points to that lead and enjoyed a 47-34 advantage heading into halftime. UAPB forced nine Mississippi Valley State turnovers in the period and turned them into 18 points.

Following intermission, UAPB continued to expand its advantage, pushing it to 50-36 before going on a 5-0 run, punctuated by a three from Pyburn, to expand its lead further to 55-36 with 3:14 to go in the third and continued to pull away for the victory.

Arkansas Football’s Most Important Transfers of 2020