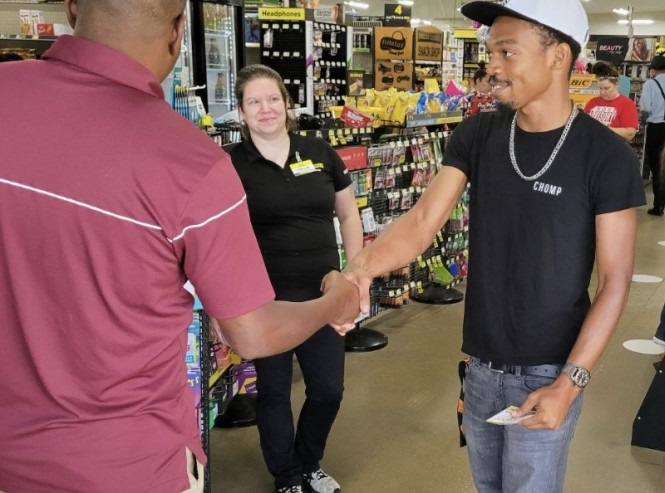 People who donate and help those in need are people blessed from God. Everyone has gone through a bad period in their life at lease once, but some people unfortunately spend their whole life in need for help, struggling to get on their own feet and finally improve their life.

Luckily, there are others who find every possible chance to donate and help in every way those in need. These people don’t wait for special donation events or GoFundMe campaigns, these heroes know how to express themselves in their ordinary day no matter if they are walking down the road or buying clothes in the shopping mall.

Such a hero is Caleb Duncan from Tennessee, an ordinary man who became locally famous last month when he decided to pay for the items of everyone in line with him in Dollar General store.

This happened on August 18 when he went in the store to buy deodorant and some T-shirts. When he was paying for his items at the register, he decided to pay for everyone’s items who were waiting in the line. He went even further and decided to leave the $80 change to the cashier.

The local Dollar General store decided to follow Duncan’s steps and called him on Saturday to come at the store once again. The store manager invited Duncan and surprised him with two $100 gift cards.

The company said it wanted to show its gratitude and appreciation for Duncan’s act of kindness and also made a $1,000 donation to the Bread of Life Food Pantry at United Methodist Church in Covington. The pastor of the church was there to accept the check.

“It was great that they thought of me, but it was really cool that they donated to that charity,” said Duncan.

As expected, Duncan didn’t stop where the story ended last month. As soon as he got the two gift cards, he decided to give one gift card to the first customer that entered the store.

“I’m kind of working, so I was like, alright, cool. I kept one so I could get some stuff for work and took the other one and gave it to however was up front,” Duncan said.

Duncan became instantly famous among the local community supporting his gesture on the social media. The fact that he was unemployed at the time when he paid for everyone in the line, makes this story even more amazing.

Duncan believes that this story will inspire many others to the same and help those in need whenever they can.

With Fourth of July in front of us, these are the Arkansas fireworks regulations how to properly use them