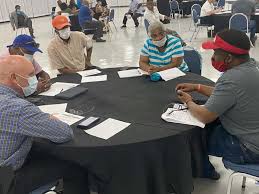 The United Citizens for Pine Bluff civic group launched a grassroots initiative to combat crime and the perception of crime in Pine Bluff Thursday morning at Pine Bluff City Hall.

Co-conveners Kymara Seals and Representative Vivian Flowers joined Pine Bluff Mayor Shirley Washington and Chief of Police Kelvin Sergeant to announce the launch of a survey of citizens in Pine Bluff in order to gauge current attitudes and perceptions of crime in Pine Bluff, then to use the facts collected to make recommendations for solutions that are broad-based and community oriented.

Seals stated that crime in Pine Bluff is not just an issue for the local law enforcement agencies to deal with, but for the citizens to deal with as well.