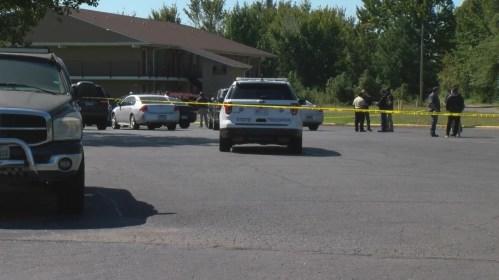 Pine Bluff, Arkansas – Two people believed to be involved in the shooting were also wounded.  Both were treated for non-life-threatening wounds at a local hospital and later released for questioning by state police.

The homicide investigation will be led by Special Agents of the Arkansas State Police Criminal Investigation Division.

The FBI has been asked to assist in the investigation.  An investigative file will be submitted to the Jefferson County Prosecuting Attorney for the consideration of criminal charges.

Three officers responded to a call around 12:05 p.m. in Pine Bluff early this afternoon, when a shootout occurred.

Two officers were shot during the shootout. One officer Raff Issac a 20-year Veteran of the Pine Bluff police department is being treated for non-life-threatening injuries.

Another officer Kevin Collins, a 5 year veteran of the PBPD was shot and pronounced dead at 2:10 p.m. from injuries sustained during the shootout.

Kelsey Collins the third officer-involved was a two 2 year veteran of the PBPD was not injured in the shootout.