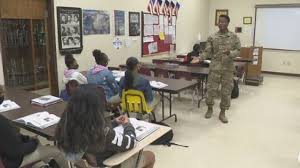 PINE BLUFF  — It’s been more than a week since the shooting at Watson Chapel Junior High school in Pine Bluff that killed 15-year-old Daylon Burnett.

On Tuesday, members from the school’s Junior Reserve Officers’ Training Corps, or ROTC, program spoke about the life of Burnett, who was one of their cadets. Major Darryle Small is the Senior Army Instructor for the program. He said he was with Burnett just minutes before he was shot. According to Small, Burnett was late to their ROTC class and was dropped off at the school by his father. He said Burnett was only in class for 20 minutes and asked what assignments he had missed.

“He went down one hallway and I went down the other hallway to go down to the office to sign some paperwork and that’s when the shooting happened,” Small said.

According to an affidavit filed by the Jefferson County Prosecuting Attorney’s Office, 15-year-old Thomas Quarles was the shooter. Originally, Quarles was being held on a count of first-degree battery as an adult. Burnett died a few days later and that charge against Quarles was upgraded to capital murder.

Small said even he is still processing what happened on campus last week.

“I’ve been to Iraq. I’ve been to war. I’ve seen people get killed and shot. To see that happen here in the community and at the high school and junior high school at Watson Chapel, it’s hard to process, even at my age,” Small said.

On Tuesday, Small during class opened a conversation about gun violence. He said the topic hits closer to home after they just experienced a school shooting.

“I think it’s something that needs to be addressed,” he said. “It is part of our JROTC curriculum, and it was coming up on a lesson plan. I feel like with it being such a tragic event and a lot of kids are trying to process what’s going on and how could it happen here, that we talk about it.”

Small said it’s been a very tough week for everyone including himself. He says Burnett was always respectful and was known to be a leader among his peers.

The school’s battalion commander and senior student, Nadiya Bowman, said the death of Burnett has been a challenge. She said as a leader, she must uplift her fellow cadets although she, too, is in mourning.

“As a leader, it’s my job to reassure my cadets that we’ve taken a loss and it is a tragedy, but we also have to hope for better days,” Bowman said. “For me, losing a cadet, it’s like wow. But like I said, I have to be strong for my other cadets and let them know we’re going to get through this.”

Bowman said she was impressed with Burnett as a young cadet and that he displayed leadership qualities early on. She said the shooting was a “shocker.”

“You hear it happen in other states and other cities, but once it actually happens to you in your hometown, it’s like dang,” she said. “It’s an eye-opener as to what needs to be done and what needs to be put in place for future references.”

According to Small, they will honor the memory of Burnett with an award in his name called the Daylon Burnett Superior Athlete Award. He said Burnett showed a lot of athleticism during physical training.

Small said their battalion will be attending Burnett’s funeral Saturday and they will be dressed in their JROTC uniform.

According to Small, Burnett’s funeral is at 2:30 pm on Saturday and that he has been given permission by his supervisor and Burnett’s family to bury him in his JROTC uniform

9 best alcoholic gifts this Mother’s Day, from cocktails to wine