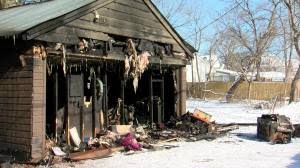 FORT SMITH, Ark.— A woman is dead and a man badly burned after a fire in a detached garage in Fort Smith overnight on Monday.

According to Fort Smith Fire Marshal Ethan Millard, the department was called at 2:35 a.m. for a fully-involved structure fire at 600 N. 13th Street in Fort Smith.

Firefighters arrived to a badly burned man outside of a detached garage, he said. After knocking down the flames, firefighters searched the building and found a deceased woman inside.

Millard said the Fort Smith Police Department is working on notifying next of kin before the identity can be released.