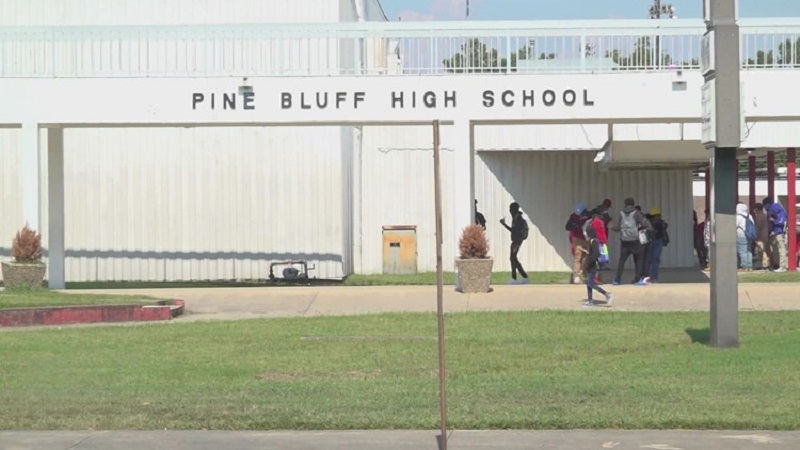 Little Rock, Arkansas – High School in Pine Bluff is an open campus with ten buildings, two of those buildings are two stories with outdoor walkways, and one involves a catwalk that’s been completely closed off.

“The building itself is known for gun violence with youth, which puts the school at a higher risk,” said Stacy Smith, deputy commissioner of the Arkansas Department of Education’s Division of Elementary and Secondary Education. “We’ve lost two students this semester to gun violence. Whether it’s three, four, or six, when you talk to the students the number changes, but every student in that school can tell you somebody that has died from gun violence in that community. Every student in that school can tell you a peer that is sitting in jail.”

Unauthorized adults on campus and unauthorized foot traffic throughout the day are causing safety concerns.

“We have people cutting through the campus. We have students cutting class. On our discipline data for cutting class, right now I’m showing there have been 142 infractions of cutting class. They can go in any direction to get off-campus. These are the ones we catch,” said Smith.

This has led to several disciplinary incidents. “Right now, there are about 141 fighting incidents that have been reported in the East school at the campus. We have 26 reported as a physical attack or harm on a student, so that’s an additional one. Disorderly conduct: 229 incidents of disorderly conduct of students at the school,” said Smith.

Disorderly conduct includes youth gang activity on campus. “We have had fights on campus, that are significant fights, considered fights between gangs,” said Smith. “Two of which were significant fights that resulted in several arrests. We had an altercation where several students were involved; where a parent came on campus and swung at a child and got arrested.”

There are also contracts with off-duty police officers to be on the campus as available and four building administrators who supervise in zones. “This is all funded by the district. At this point, it shows the district has spent close to half a million dollars on security alone,” said Smith. “The school district is trying to provide a safe environment for students.”